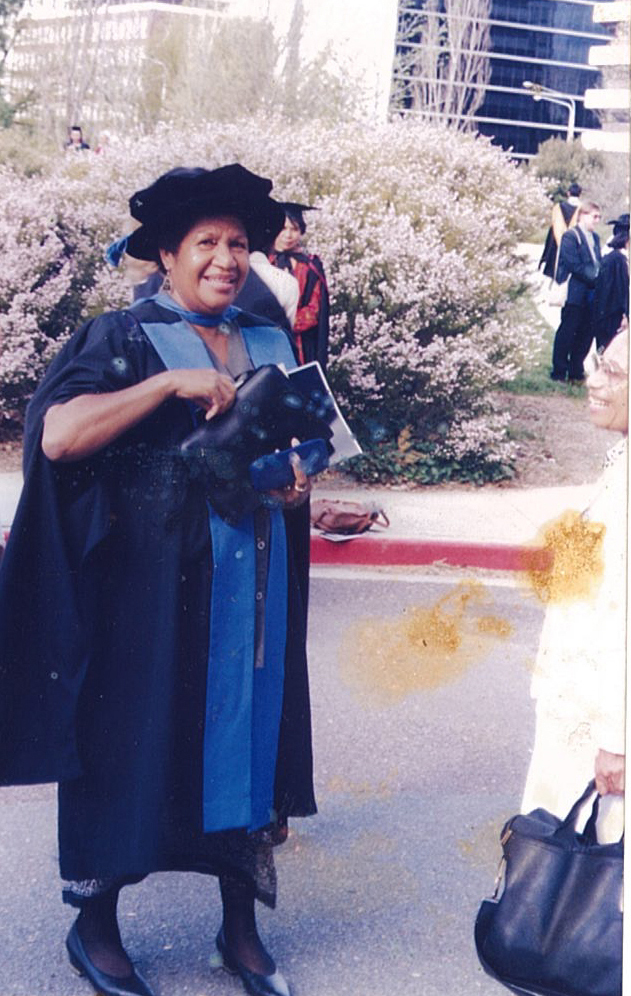 A teacher, advocate, mentor and silent achiever, the late Dr. Anne Nealibo Dickson-Waiko will be remembered for her contributions to the advancement of women in PNG. Hailing from Wagawaga in the Milne bay province, Anne was born on the 15th of May in 1950, the fourth child of five children to Osineru and Doreen Dickson. From her humble beginnings as a young six-year-old school girl at Kwato Mission Primary School, Anne continued at Port Moresby High School completing Forms 1 to 4 (1963 to 1966) to attaining a Diploma in Teaching Secondary School at the Goroka Teachers College. From 1971 to 1973 she began teaching at Kilakila High School, during this time she married Mr. John Kaniku (also a teacher) and had two sons.

Juggling motherhood and work, late Dr. Anne joined the University of Papua New Guinea (UPNG) as a Professional Assistant (Social Science) at the Teaching Methods Center from 1974 to 1977. Concurrently, she studied part time for a Bachelor of Arts in which she graduated with 1st class honours. Late Dr. Anne was less of a talker and more of a doer, a trait that I admired. She would encourage me to take up further studies and hearing her eulogy during her funeral service made me realise why she did. She had pursued her studies and wanted other young PNG girls and women to do so.

From 1978 to 1981, Anne accompanied by her husband John Kaniku and two sons undertook Masters study in the United States of America (USA). With the joy of having a third son, came sadness, when tragedy struck, she lost her first-born son. The years in USA were difficult times for Anne and her family but nevertheless she completed her Masters in Political Science at the University of Mississippi in 1981. In 1986, she had a daughter with John Kaniku. Their marriage dissolved soon after. By 1987 she undertook PhD studies at the Australian National University in Canberra for 6 years and was awarded her doctorate in 1993. During this time, she had re-married Professor John Waiko and had a son in Canberra. As Professor John Waiko was based in Port Moresby, she left her young son with him while she went for her field work in the Philipphines for several months. Late Dr. Anne had raised her three other children from her previous marriage during the 6 years or so in Canberra.

The late Dr. Anne Dickson-Waiko was a dedicated academic who worked extremely hard until she fell ill in September 2018. She had always kept her personal life away from her professional life. Professor Yearwood, strand leader for the History, Gender Studies and Philosophy Strand at the UPNG described Dr. Waiko as a valuable and dedicated lecturer for the strand. As an academic, researcher and later an advocate for gender equality in PNG, she focused much on history and gender studies. Some of her publications include - In 1974 as a student at UPNG she wrote an article titled ‘Religious Confusion’ in Yagl Ambu (Vol.4 No.4, pp.264-83); 1981 her first publication was titled ‘Milne Bay Women’ a chapter in Denoon & Lacey (eds.) book titled “Oral traditions in Melanesia’. Her niece Marjorie Andrew had described this as the start of her academic career and interest in gender studies. The UPNG recognised her as an internationally significant scholar who between 2005-2015 wrote seven articles or chapters in refereed journals and books thus making her one of the most published authors in the school.

I recall as a student at UPNG enjoying her classes for Gender Issues in PNG, Colonialism & Nation Building and South East Asian History. Her colleague, Professor Yearwood added that her scholarly interests were not confined to PNG, but extended to the Philipphines, East Asia and South-East Asia. Her specific areas of interest were in Third World Women’s Movement (Philippines), PNG Women’s Political History & Colonial History to 1960s, Oral History, Witchcraft, Gender & Development and Nation Building. Dr. Waiko was also a consultant, advisor and facilitator for a number of gender related projects which she engaged in with government, non-government and international organisations and donors. Hence, she advocated for gender equality and women empowerment in PNG. Late Dr. Waiko produced numerous reports on gender analysis in policy making & development, women’s machinery in PNG, gender equality & political governance, gender mainstreaming and women’s aspects of training & capacity building.

Late Dr. Waiko most significant contribution to women’s improvement in PNG was her involvement in the Review of the Organic Law on Provincial and Local Level government led by Ben Micah in 1995 with other women academics and leaders of PNG. Her involvement looked at incorporating women’s representation in both the provincial and local level government particularly in having nominated seats for women. This was approved by the National Parliament and made effective in 1997. This was a turning point for women in politics as it allowed for women to participate and be heard at the provincial and local level of government. I hope that this revelation will be made known to many PNG girls and women so that we are grateful for women who paved the way for our voices to be heard.

Like other educated women, Dr. Anne Dickson-Waiko had achieved so much and contributed greatly to PNG in her life span. In a country were females were and are still regarded as inferior to men and confined to the home, she had proved that PNG women could do otherwise. She was a Fulbright scholar later, attaining a Master’s in political science then a doctorate. Her thesis title was ‘A women’s Place is in the Struggle: Feminism and Nationalism in the Philippines’ in Australia.

Remarkably, Dr. Waiko spent 45 years at the University of Papua New Guinea, most of her lifetime, and over the years she imparted her knowledge to contributing to the development of PNG particularly the female population. This year as we celebrate National Women’s Day, the Gender in PNG research program at the PNG National Research Institute pays tribute to late Dr. Anne for her contribution to the Institutes Gender in PNG research program.

In 2016, Dr. Anne, pioneer of PNG’s first Gender Studies program at UPNG and PNG as a whole was commissioned by the National Research Institute to carry out a scoping study which subsequently informed the research themes of the gender program. Today the Gender in PNG Research Program has three thematic areas of women in leadership, gender-based violence and women in the informal economy in PNG. The Gender team strongly adheres to ‘balancing for better ’. A colleague of mine described Dr. Anne as a passionate woman who supported gender equality through her work, teaching and research. Thank you Dr. Anne Nealibo Dickson-Waiko a ‘shero’ you are and with this we dedicate this short poem:

You dedicated your life to improve the lives of the masses. Sacrifices made, and hurdles jumped.
Yet strived to put a smile on another’s face.
With a humble heart and a sweet smile, you still persevered.
Gratitude is all that can be offered at this time
But your legacy will remain.
Smile and know that it will get better.

The Gender in PNG Research of the PNG National Research Institute program acknowledges: