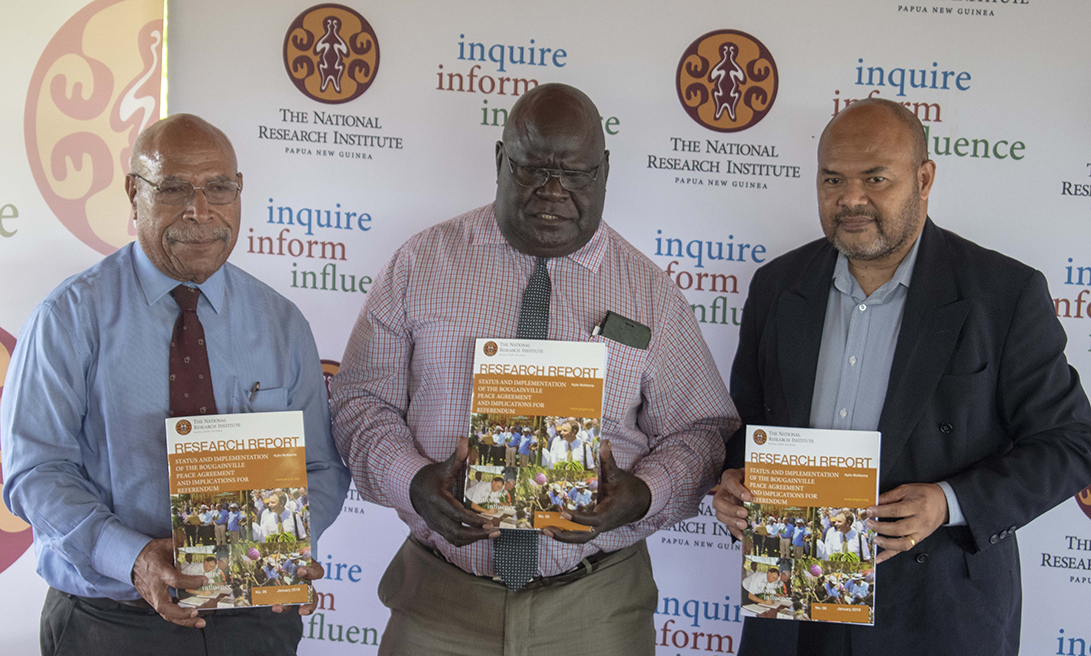 Title of report: Status of the Bougainville Peace Agreement and Implications for the Referendum

May I extend to you all a warm welcome to the launch of the research paper on the ‘Status and Implementation of the Bougainville Peace Agreement and Implications for Referendum’ by Dr Kylie McKenna of the University of Technology, Sydney. May I take the opportunity to extend a special welcome to Honourable Joseph Lera, the Regional Member for Bougainville to the National Parliament and also the Deputy Chair of the Bi-Partisan Committee on Bougainville Affairs who has accepted our invitation to launch the Research Report. This is the last of the six research papers produced by the PNG-NRI under its Bougainville Referendum Research Project (BRRP) that is headed by Dr Thomas Webster.

Dr Webster has earlier made some specific remarks on the paper being launched today. So, l want to focus on why the PNG-NRI places priority on ongoing research undertaken on the Bougainville Referendum that was agreed to as a key element of the Bougainville Peace Agreement (BPA) that ended a terrible ten-year civil war.
The future of Bougainville’s political governance arrangement will be determined through a Referendum where the people of Bougainville will choose between ‘Greater autonomy’ and ‘Independence’. The target date set for the referendum of 15th June 2019 is just four months away.

This event has major implications for the future of Bougainville and for Papua New Guinea.

The National Research Institute Act (1993) states that the functions of NRI are:
(a) “The promotion of research into Papua New Guinea Society and the economy”, and in particular
(b) “the undertaking of research into social, political and economic problems of Papua New Guinea in order to enable practical solutions to such problems to be formulated” (Section 5, NRI Act, 1993).

The PNG NRI Council in its wisdom decided to establish the Bougainville Referendum Research Project to help us understand better and prepare for the planned referendum since this event has social, political, and economic ramifications for Papua New Guinea of which Bougainville is a part.

A total of five research reports, and the one being launched today being the sixth, have been produced by independent researchers on topics ranging from “What is a referendum and why it is being held” to “What are the the possible outcomes and the implications of how they could be implemented”. These studies have drawn on international comparative analysis to inform discussions in preparation for the referendum and in understanding the implications of the choices on offer. The hope is that these research reports will contribute to the preparations for the referendum and in the implementation of the outcome following the voting by the people of Bougainville.

Some of you will recall that the PNG-NRI held a National Conference on the Bougainville Referendum last June with the theme “Implementation of the Peace Agreement and Implications for the Referendum”. This was indeed the very first national conversation on the referendum drawing attention to the importance of the event for the nation as well as for all parties to give greater attention to the preparations. I want to restate what I said then at that time.

The referendum is an important milestone in the journey of Papua New Guinea to peace and prosperity. The decade long conflict in Bougainville cost thousands of lives and had a negative impact in the development of the nation.

It is in the interest of every citizen of PNG that the Referendum is well prepared and well administered, in a manner that all parties respect the outcome, and results in continuing peace for the people of Bougainville and PNG more broadly.

On this note and without sounding alarmist, I want to reiterate and highlight some concerns as the Director of the PNG NRI. I am concerned that the preparations underway to date for the referendum is behind schedule with only four months to go before the target date of 15th June 2019. The deadline of June 2020, when the Referendum must be held as per the BPA looms ever closer every day.

Consequently, we run the risk of either deferring the referendum from the June 15th target date and/or holding one without adequate preparation.

I note and the reasons for my concern are:

Rushing into a referendum without adequate preparations could compromise the credibility of the outcome and pose serious implications. Our research reports all point out the importance of thorough preparations, sound administration and a process enabling free and fair voting where the results are credible and accepted by all parties.

The Referendum is a one-off event, and we ALL will live with the effects of the Referendum for a long time afterwards. It is therefore imperative that we give it the attention and priority that this very important NATIONAL event deserves.

Once Again, thank you all for coming and attending this launch. I do hope that you will read this report and engage with the discussions on the referendum.